I found this task really enjoyable to complete. I decided to do some sketches on portraits I definitely wanted to recreate.
I started off with Frida khahal

my own remade version of this portrait

My second portrait I chose to recreate was,

My last one I chose to recreate,

“Girl with the Pearl earring”

Overall I found this task very enjoyable, as it enabled me to be very creative with my own portraits, while having fun with the task along the way.

We were tasked with creating our own album covers , which was a task I really enjoy. Our covers were to be inspired by the punk movement, a musical and social movement that snarled in the face of authority and wasn’t averse to spitting at its friends, punk has received a great many shelf inches in the last 30 years respectfully devoted to histories, reassessments and eyewitness accounts.

My chosen song was, “Riptide,” a global hit performed by Australian singer-songwriter James Keogh, who is better known by his alias, Vance Joy. . I chose this song as it is well known and tells a story within its lyrics.
The song is known to relate to Vance joys girlfriend at the time. He mentions in the song about his insecurities, “ I was scared of dentist and the dark” then goes on to describe how she was the reason for all of his insecurities to disappear. She had a dream to be a Hollywood actress, however Vance knew that Hollywood and the attention would destroy her. However he assured her that he would support her dreams regardless, “your left hand man”.
My front cover of, “Riptide” I wanted it to be bright and represent dreams. Therefore I wanted a colourful colour scheme, with pictures of sunsets. This also refers back to the music video, the shoots of the sky in the beginning. On the left I drew a hand representing Vance’s line, “left hand man”. My font was hand written on top of tracing paper. The vinyl record disc I wanted to be more simple, black marker and a drawing two  hands holding each-other, representing their love. The back of the cover has a much more of a dull colour scheme, with placed black mark makings. This is to represent how she was, “taking away to the dark side” that destroyed her dreams and spirit. Again I placed the hand on the left hand side, to show that even in the dark side he’s there with her holding her hand throughout her journey she wished to explore.

To complete this task I used my favourite 12 sketches of my 26 words. In order to complete my paper drawings I used white card, black paper and various shades of blue sharpies, while also using a Stanley knife and glue.

Art direction brings to our work clarity and definition; it allows our work to communicate a particular message to a specific group of people. To trigger a cultural and emotional reaction, art direction incorporates art and design. It affects films, music, blogs, magazines, just about everything with which we communicate. We’re left with dry, sterile encounters that are quickly forgotten without art direction. Art direction is about evoking the right emotion, it’s about creating that connection to what you’re seeing and experiencing. “Art direction is a filter for making judgments; you pass every design choice through it. Start by determining the overall emotion. All the copy, photography, UI elements, buttons, and the kitchen sink should be pinged against this ideal. I like to think of it as the Magic Kaleidoscope Looking Glass. It helps to determine which path I need to take when struggling with design decisions”. —Christopher Cashdollar, Creative Director 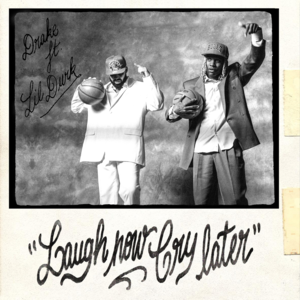 “Laugh Now Cry Later” Is a song by Canadian rapper Drake, with vocals from the American rapper Lil Durk. It was released on August 14, 2020, as the lead single from the upcoming sixth studio album Certified Lover Boy by Drake through Republic Records and OVO Sound. The video features shots of Drake participating in various athletic activities: underwater boxing, as a reference to Muhammad Ali, running on a treadmill in the sports science laboratory of Nike, and going on a shopping spree in a closed down Nike store, as well as riding jet skis from Durk and Drake.

The designer of this album cover has focused on a vintage theme, consisting of an off-white background with attached cream distressed tones placed at the right side. The main attraction would be the black and white photograph of Drake and Durk, who are both captured holding basket balls. The designer has deliberately dressed Drake posing in an oversized white suit, in order to replicate Lebron James draft day pictures, when Lebron was drafted to Cleveland on June 26th, 2003. The photograph is finished with a black edging boarder around it, creating a stark contrast with the lighter colour tones. In terms of the font that is placed over the album, the designer has continued with their vintage theme, using a black handwritten calligraphy placed in two different font sizes.

Overall, I think drake is an amazing artist in the music industry, who has an extremely talented designer team alongside him, that create such album covers that have much thought behind them.

Peter Strain is an AOI and Communication Arts Award winning Illustrator working and living in Belfast. Film and music as well as social, political, and cultural problems are the inspiration for his work. He addresses these with his highly distinctive style of hand lettering, bold imagery, and humour. His work is based around people looking back and accessing their lives. Consisting of themes of love, regret, and mortality. “I suppose telling a story through a single image is important to me and mixing in typography allows me to do that.” His work includes a lot of pop culture influenced work as well because he has a passion for music and film. He is known for sometimes using these influences for more humorous/ satirical work and at other times they help him inform some of the more personal or serious projects.

I practically enjoy viewing peters work, as he shows great honesty through his art. He expresses his political views though his amazing illustrations, for example his piece on the American presidency. It is modern art relating to a global situation in the world. Many will find his work humorous and something they can enjoy to look at, while reflecting upon the issue it refers to. He also explores other issues such as the, “Black Lives Matter” campaign. Personally, it is very inspiring for an artist to express their opinions on such global controversial issues. Peter through one portrait, creates a piece that paints many different stories. His typography narrates the issue, while his many illustrations in the one piece express and represent that issue. Many use newsletters, articles, and magazines to get people to talk about global issues, however peter strain uses his art to bring that same effect and attention upon the public to address such issues. 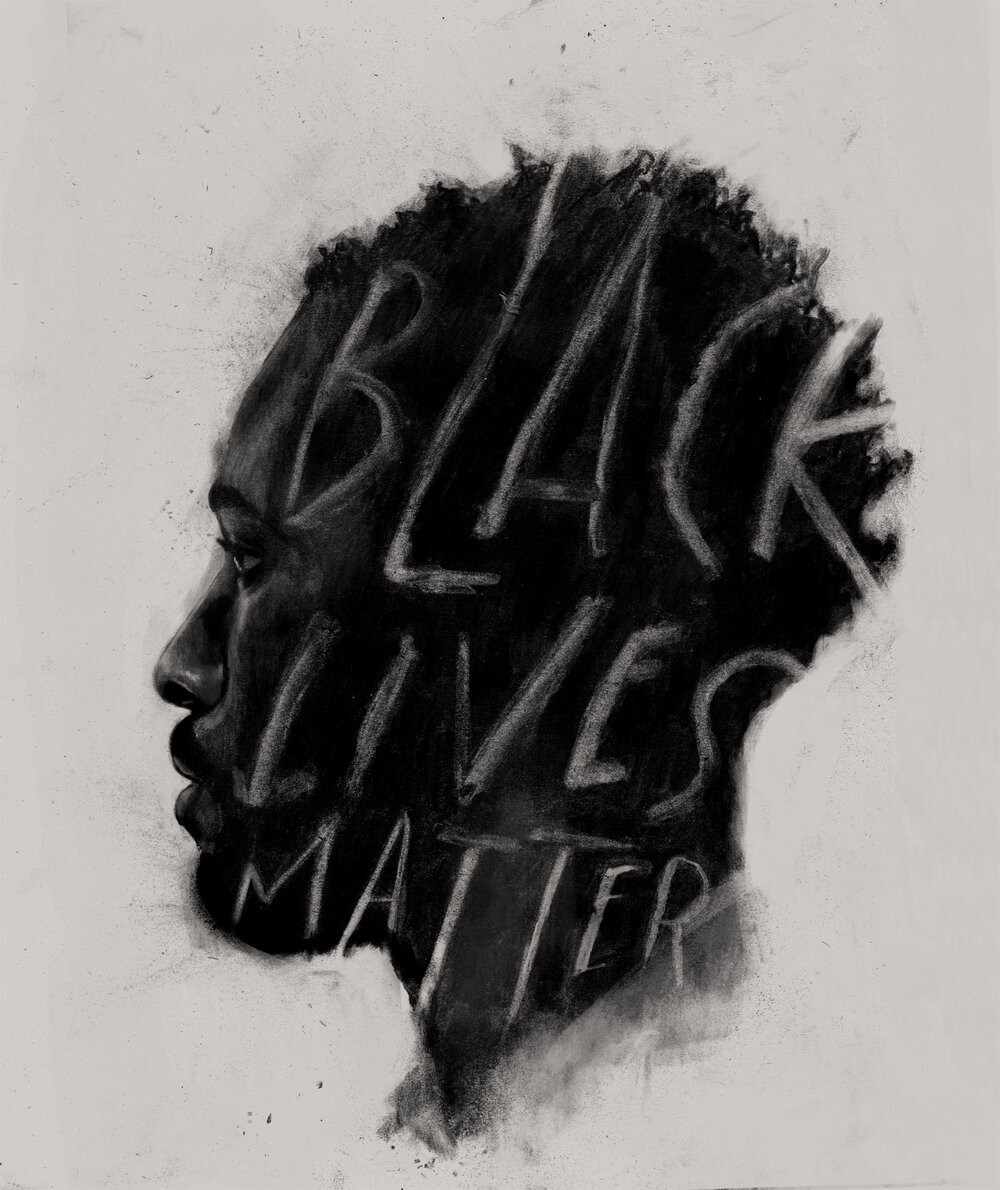 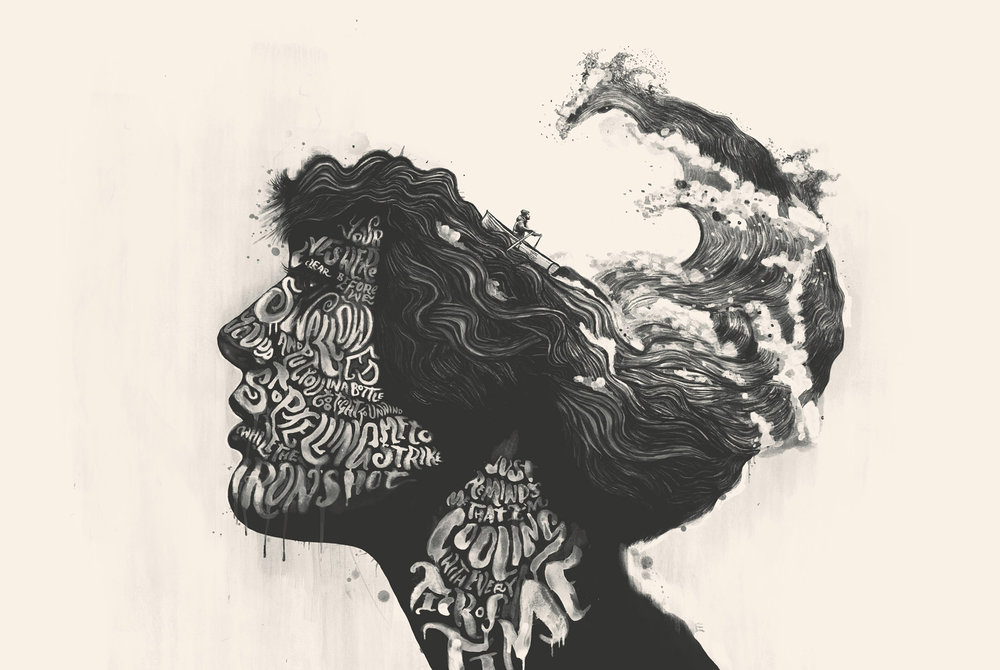 I really loved this task, as I found making a gif very enjoyable, as I got to see my favourite 12 digital sketches come together as one graphic piece. It is definitely something I will try again in the future.

Specializing in Branding, Graphic/Web Design, Illustration & Photography, Mike is a UK based artist. He has a client list worldwide and his work is also published in magazines and is often featured in design related publications. Kus was always interested in innovative concepts as a kid and even used to submit trainer designs to Adidas. Kus attended Chichester University and graduated with a BA Honors in Art.  At Carsonified, a web events company in Bath, UK, he became the Senior Designer. Kus honed both his artistic and technical skills as a web designer at Carsonified. Three years later, Kuss formed Mike Kus LTD in 2011, where he works in graphic & web design for customers worldwide. Burberry, Red Bull, Land Rover, O2, Mixture.io, and apient Nitro are among some of his customers. In addition, Kus’s unique photography has led him to gain almost 800k followers on Instagram being amassed by him. According to Kus, his inspiration comes from the people around him that he works alongside daily. Kus is also a firm believer in “doing things your way”. He says that “there is a lot of peer pressure in the industry to do things a certain way” and his advice is to just “ignore this pressure and do it your way”.I found mikes kus’ work extremely creative, especially his choice colour. The vibrant typography placed at the forefront of his image immediately grabs your attention, therefore drawing his viewers in. Kus has created a set of three posters exploring the design possibilities of combining imagery with graphic design and typography. Overall I find his work inspiring and engaging.

I enjoyed this task of creating my previous sketches into something much more graphic. To create these digital drawings I used the app, “ procreate”. I chose to stick with a colour plate of 3/4 colours, white, black, blue tones and an orange.

During animation we were giving a task that involved using ‘stop motion’ in order to create our own gifs. I first began using only one battery, taking a photo each time it moved 10cm. This was my first time using the app ‘stop motion’ which I downloaded on my phone. However I enjoyed creating this and continued on to use 3 batteries, and created a unique pattern instead of continuing with a straight line.