At first, I have no idea where to start. More specifically, because there was an overwhelming amount of bank user interfaces that I could potentially replicate, I didn’t know which ones I should choose.

So I started with the basic, with the opening screens, which all bank apps would have; The left side is Monzo’s user interface, and the right side is my replication.

The font I chose was Noto sans. I chose it for a few reasons;

Next, I did some research on bank apps, and there were a few articles which were very helpful. My favourite resource is an article from Medium which gave the links to 10 different case studies of banking apps, and another article called “Banking app design: 10 great patterns “by justinmind.com.

After reading some of the studies, I noticed that a lot of these apps share some common functions. 1 is the wallet function, and the other is a daily summary of transactions. I decide to incorporate these 2 functions into my app; ( On the left is a template from Fimga called Monzo app concept, and on the right is my replication. I chose this template because of how clean and simple the wallet function is. I also really liked that in the traction section, it shows daily spending and how much money you out left to spend in the month with a visual meter)

While researching, I came across a screen design which incropated triangles into its spending summary. I really liked this idea as my own brand has a focus on triangles; While I was designing my bank user interface, I continue to look up triangle designs online. I am fascinated by the patterns, and one day when I was looking at fabric pints on Pinterest I came across this; 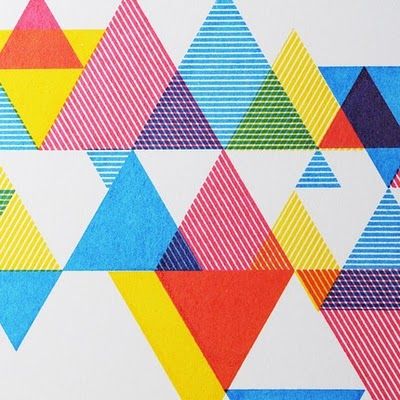 And this pattern inspired my book design;